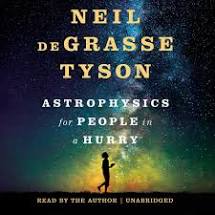 Throughout my time reading this title, I was constantly repeating to myself, “I know some of those words,” as the author, Neil deGrasse Tyson introduced new ideas. I am quite removed from my last academic course dealing with the inner-workings of the universe, so I was a little proud of myself that I recognized as many terms as I did even before they were explained. Even as a relative beginner in terms of astrophysics, as most people who are pick up this book will be, Tyson made the concepts just within reach. He related dissimilar concepts in order to make mental connections. He put things in common, everyday language. Tyson even went so far as to prove one such concept with a nighttime beverage:

Physical laws of the universe DO come in handy for daily life.

Tyson has written with the accessibility seen above even if the topic was nowhere near easy to grasp–like the birth of the universe. He mixed humor within his writing as he dissected and broke down incredibly complex scientific aspects which made the process even easier to understand. A simple, little joke like, “cosmology–not to be confused with cosmetology,” helped this reader relax when literally faced with the vastness of the universe. What makes that part even more daunting is that the universe is still expanding as I type! Still, the writing was concise yet vivid, deep yet approachable.

From explaining the existence of dark matter–though it technically has not been found–to walking through the creation of the universe step-by-step, Tyson ensured his readers had everything they needed to make sense of the concepts. He took time to explain aspects using both scientific jargon and layman’s terms. Will this book make the reader fluent in every concept? No, of course not. The more appropriate question would be: Did this book help the reader understand and appreciate more about the universe? The answer to that question is a resounding yes!

Arguably one of the best parts of the whole book was the dedication: “For all those who are too busy to read fat books yet nonetheless seek a conduit to the cosmos.” A better statement about this book may not exist.

At the present time, I definitely do not feel ready for those fat books just yet, but I feel a bit more confident in my ability to work my way there now.