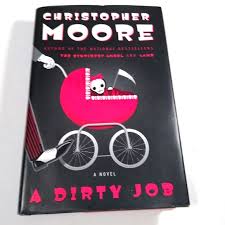 From the very beginning we see that Charlie Asher, the main character, is a bit of a worrier and fits right in with the “beta male” description painted by the narrator. Life just seems to pass him by in seemingly every possible way. As the novel starts, he is having a bad month (Charlie’s words). Following the sudden death of his wife just hours after she gave birth, Charlie tries to figure out how to keep it together and keep going with his life. This, as it turns out, will be much more difficult than he would have expected. He is grieving his wife, trying to learn how to raise a daughter, and run a secondhand shop all at once. On top of all of this, Charlie receives a new job, one he did not apply for nor want.

Charlie becomes Death pretty much accidentally. He is not the only one, either, so I guess calling him a Death is more appropriate here. Now, Beta Male Charlie is not the type to bring about the death of anyone. He does not have the constitution for such work. He is tasked, however, with the collection of the soul vessels, items in which a dying person’s soul is contained. That should not be too bad for someone who runs a secondhand store. Unfortunately, Charlie did not read the instruction book before his first day, so he is abruptly thrown into yet another new life stage. (Yes, to answer your question there actually is an instruction book for collecting souls.) For better or worse, he is now responsible, in part, for the balance of our world and ensuring the forces of darkness do not regain a footing in the mortal realm. No big deal, right? Hopefully his on-the-job training goes well. And quickly. Something dark and menacing is waiting.

Charlie is surrounded and aided by an oddball collection of characters throughout the story, collecting a few new ones as he goes. Some are in on his secret and fully support him, while a few just think he is losing his mind but still support him anyway. Sarcasm, limit-pushing and irreverent jokes, and socially awkward moments are quite plentiful throughout this novel.