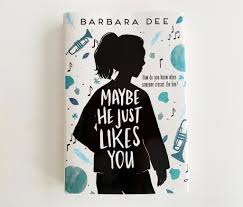 Andrea reviews MAYBE HE JUST LIKES YOU by Barbara Dee, Simon & Schuster Children’s Publishing, 2019, 283 pages. Sometimes the best part of working in a library is getting to see what all my collection owns and what different genres are on the shelves. I have always had a soft spot for the Young Adult collection because even though the characters are often anywhere from middle school age to teenagers to almost adults, lots of times the authors of these books write their characters into sticky, adult-like situations. Mila in MAYBE HE JUST LIKES YOU in one such character.

Barbara Dee’s Mila is a typical middle schooler whose body is going through natural changes that embarrass her and surprise her all at once.She definitely could do without the boys in her class noticing, either. Unfortunately the awkward comments and the not so innocent gropes quickly escalated into bullying and harassment. Mila’s friends told her to play it off because the boys were just flirting with her. (“You don’t understand flirting, Mila, because you have never been flirted with,”  my so-called best freind, Zara, claimed.) HUH?

When her friends found out the boys had an online score card for all the things they did to Mila, her feelings were past hurt. She wanted the boys to be punished, obviously, but did not know who she could tell. Her guidance couselor was on maternity leave, her single mom had enough daily stress, and which teacher would have believed her anyway?

This is a heartbreaking story of bullying. harassment, compassion, and redemption. Unfortunately, stories such as Mila’s happen every day. It’s up to us to listen and to stop such events. Quicker than ever.