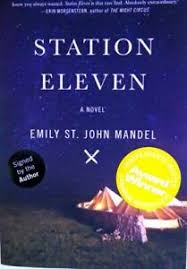 Novels that start with tragedy, no matter the scale, usually do not contain pleasant themes. An ominous sentence to end an early chapter further complicates the narrative to follow. Station Eleven is two-for-two in this regard. These tragic moments foreshadow just how quickly things can cease to exist in the way they always have, the way they are always expected to exist, much like how many feared things would come to a halt last year. These events give way to twenty years after the collapse of civilization as we know it. Picture life in The Walking Dead: marauders and doomsday cults, just no zombies. This is the existence humanity now faces.

Do not worry. The world is not just gloom and sporadic settlements living off expired beans and whatever they may be able to grow. There is still the Symphony travelling the sporadic settlements bringing music and Shakespeare to brighten the days. On the side of the first caravan are the words “Because survival is insufficient.” This Symphony is its own type of small, traveling town. Since simply surviving is not enough for this troup, they do what they can to bring glimpses of civilization back to what is left of the world. As they move across the abandoned areas, they continue to find ruins and remnants of a world which no longer exists.

Flashbacks to different times before the collapse help fill in background for the narrative, even going so far as to explain the origins of rare comic books one character carries with her. They add background to the lives surrounding actor Arthur Leander in the days and years leading to the collapse. This patchwork look bleeds into the time immediately following as well, showing what life was like in the early days of a new era. Knowing how the word ends up twenty or so years in the future puts the mundane and everyday issues into a drastically different perspective. The past is, ultimately, used to explain and understand the present of this novel. Still, relationships, jobs, and everything all have a different weight to them when examined the way they are, and it is surprisingly jarring.

In the present narrative, though, the relatively peaceful routine of traveling and performing in familiar towns (or as close to town-like as possible) is shattered once the Symphony finds out some sort of cult with oddly familiar beliefs has taken over one such town in which two of their own had resided since their last visit. After making a quick exit due to meeting the “prophet” of this cult, the escape is further complicated when a young, female stowaway who is promised to the prophet is found. This is not one of the peaceful and caring prophets, either. His group is known for their collection of weapons and uncompromising methods. Members go missing without a trace. Groups get separated. Panic begins to spread much like the Georgia Flu that brought about the collapse.

Both the before times and the present in the novel have their emotionally gripping moments that jerk you in different ways. Both show people trying to do the best they can with the lives they have. Both demonstrate, though quite differently, how “survival is insufficient.” Jumping back and forth serves only to heighten these feelings. As a reader, I wanted badly to jump to the next continuation but could never skip over the other time period. The two time settings for the novel serve to complement and explain one another in ways that are never precisely clear in the moment but still feel like they fit together naturally.

Regardless of one’s situation in life, the reader is left with the (almost haunting) reminder that “survival is insufficient” throughout the story. (And, yes, that quote the Symphony uses did originally appear in Star Trek:Voyager.)